About Cuccia Creative and David Cuccia

“If I don’t enjoy what I’m illustrating, then I can’t expect my audience to enjoy it either.”

A simple statement reaffirming David’s love for illustration which began at age 6. “From the first moment I picked up a pencil,

I knew exactly what I wanted to do!”

A 1974 graduate of New Albany High School, David began pursuing his dream of illustrating comic books by training at the Joe Kubert School of Cartoon and Graphic Art in New Jersey. However, an introduction to the field of advertising design and illustration gave him a different and more exciting path to follow … one that’s lasted more than 30 years. 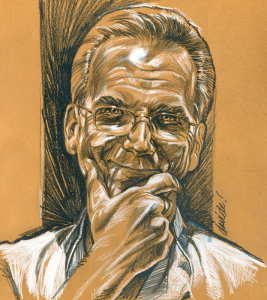 Logo designs and branding, brochures, billboards, newsletters, illustrations for various trade publications have all shown David there’s literally nothing he cannot create for his clients. Over the years, illustrating television storyboards for design firms and advertising agencies has honed David’s skills as a graphic storyteller, and allows him to now add author and illustrator of children’s books (Cuccia Kids Books) to his repertoire.

An active pet adoption advocate, David still donates his time and talents to numerous rescue organizations and shelters whenever possible, as he’s done for many years. Proud of his Sicilian heritage and family, David publishes his children’s books in both English and Italian versions.